Polish immigrants, lured by factory jobs, started settling in Wyandotte during the late 1860s. On November 22, 1870, Rev. Fr. Xavier Szulak, S.J., arrived on mission and the Society of St. Stanislaus Kostka was established. Harsh living conditions and a recession in 1875 forced many to leave and the society temporarily dissolved. The society was revived in 1888 and theyattended one of two ethnic parishes in Wyandotte: either the Irish parish of St. Patrick or the German parish of St. Joseph.  Rev. Fr. Vitold Buchaczkowski, from SS. Cyril and Methodius Seminary, would minister to the downriver area once a month.
Approximately 150 Polish families immigrated to Wyandotte 1888-1898. They first attended St. Joseph, then moved to St. Patrick but sought to establish their own parish. A group of six men bought several lots on Tenth Street, in an area then called “New Jerusalem,” for the future church. The seller, Welch Brothers Realty, also donated eight lots. On September 8, 1899, Bishop John Foley inspected the area and approved. He appointed Rev. Fr. Bernard Zmijewski of Bronson, MI, as first pastor. Fr. Zmijewski arrived ten days later and held Mass at St. Patrick.

Parishioners wanted the patronage of Our Lady of the Scapular but the request was denied by Bishop Foley. The cornerstone of the combination church and school was laid on December 3, 1899, then completed and dedicated on July 8 of the following year. Rev. Fr. John Moneta, a professor from SS. Cyril and Methodius Seminary in Detroit, preached the homily and was assisted by the choir from St. Josaphat's Church, Detroit.
Construction of the first church totaled $26,961.15 or more than $700,000 today. This was financed by $7,063.69 in donations, a $15,000 bank loan, and $5,000 from the pastor. Fr. Zmijewski also built a rectory with his own money and started a library filled with 500 volumes of Polish and English books. Fr. Zmijewski petitioned the Felician Sisters to start a school and the request was granted. In September, 1901, they started with two classrooms, for first and second grade, in the basement. the following year, 113 students enrolled. 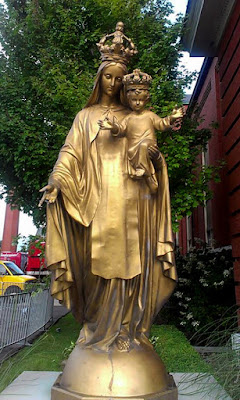 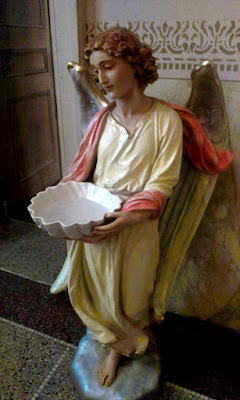 Disagreements and misunderstanding forced Fr. Zmijewski to be reassigned after six years. His successor, Fr. Frank Sajecki, lasted just one week due to poor health and soon died at the age of 33. Rev.  Fr. Joseph Lempka, who was a Vicar at St. Albertus, succeeded as pastor on April 24, 1906, and spent three years dealing with parish debt. in addition to the debt, a new rectory had to be built for $5,000 because the first one was property of the previous pastor.
The first rectory was abandoned and eventually used to treat victims of a tuberculosis epidemic. Twenty Felicians died from their ministry, all of whom age 21 or younger. In 1909, Rev. Fr. Constantine Dziuk was installed as the third pastor and he bought all of the adjacent, vacant property with the desire to expand the parish. Two years later, he was transferred to Assumption Grotto. 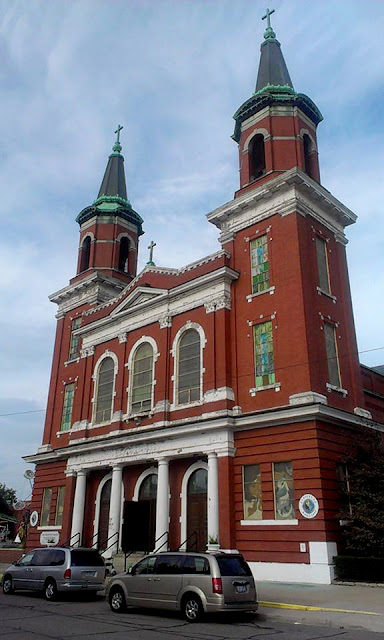 Rev. Fr. Alexander Grudzinski succeeded as the fourth pastor in 20 years. His seven-year pastorate saw the construction of the current church. It was designed by Harry J. Rill, also architect of St. Leo's in Detroit, following the 'Polish Cathedral style.' and opened in 1915. A new convent was soon built, a new church organ installed and the school expanded. 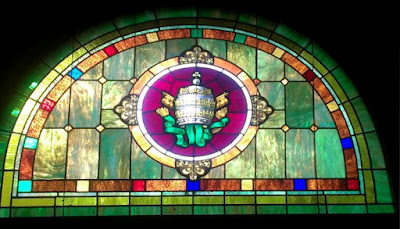 The parish quickly went through two more pastors before Rev. Fr. Leon Jarecki came in 1920. He soon added three bells, christened and named them as St. Stanislaus Kostka, Holy Angels, and Queen of Poland. On April 7, 1921, Fr. Jarecki was shot and killed by an unknown murderer when he answered a call at the rectory door. 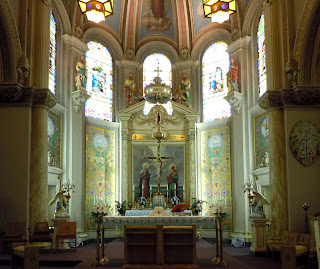 Rev. Fr. Peter Kruszka soon succeeded as eighth pastor in 22 years and thankfully remained there for 17 years. He established a parish high school in 1928, enlarged the convent and elementary school, and even built a neighborhood heating plant. Failing health forced Fr. Kruszka to go on sabbatical in 1938 however he would not recover and died the following spring. 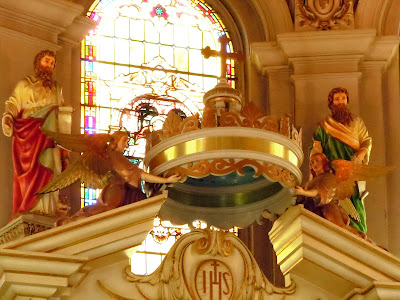 The parish had a brief administrator before Rev. Fr. Ladislaus A. Krych was appointed by Cardinal Mooney. At that time, the elementary school had an enrollment of 520. Fr. Krych added a kindergarten, organized a school band and orchestra, and bought necessary instruments. 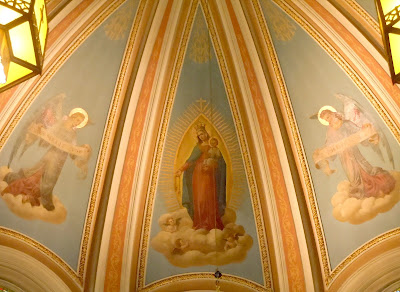 Enrollment continued to climb over the next decade to a total of 737 elementary students.  The parish debt was paid off on January 15, 1946, after nearly fifty years. Fr. Kyrch led renovations of the church and parish grounds until he died from heart disease on March 17, 1956. 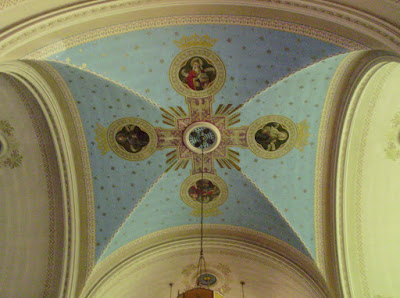 Rev. Fr Jerome Juchniewicz took over four years before his death from a heart attack. Rev. Fr. Venanty Szymanski was appointed pastor in September of 1963 and he built a new elementary school building three years later. A financial crisis struck the archdiocese in 1963; six Wyandotte parishes were advised to consolidate to one, central high school and Our Lady of Mt. Carmel refused. 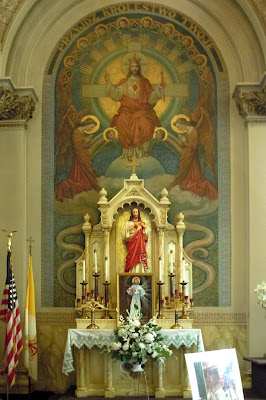 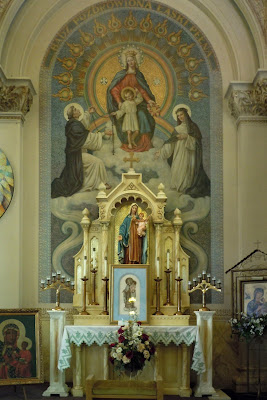 Fr. Szymanski suffered a series of strokes before he resigned in May 1972. Former vicar, Rev. Fr. Stanley Redwick was appointed pastor in August of that year and remained there until poor health forced him to resign in the early 1990s. Rev. Canon Walter J. Ptak succeeded as pastor and remained there until he was reassigned to Ss. Cyril & Methodius Seminary a few years ago. 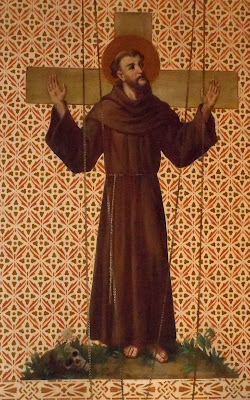 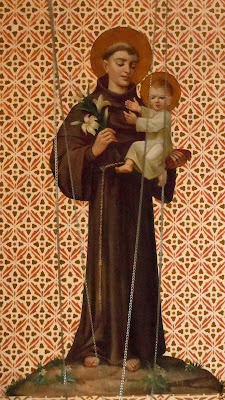 A Polish sculptor, Czeslaw Dzwigaj, created a statue of St. John Paul II, it was installed outside the southwest corner of the church and blessed by Cardinal Maida on October 31, 2004. 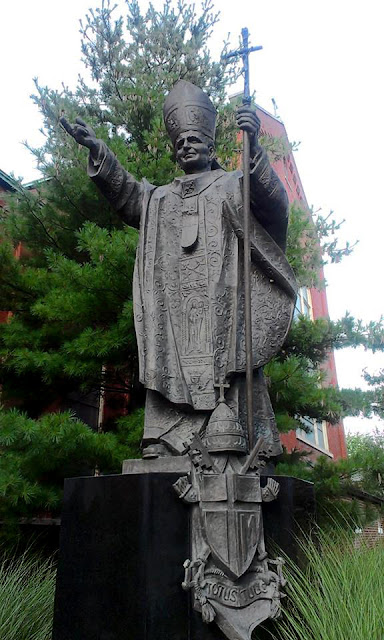 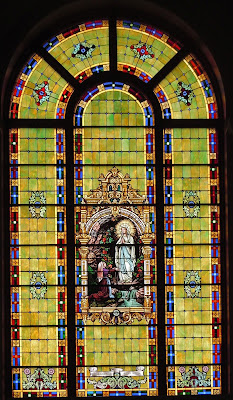 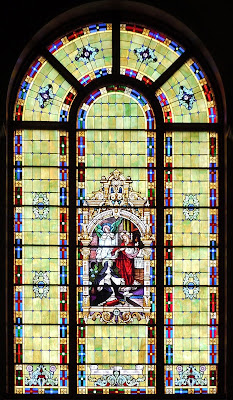 Mt. Carmel Catholic Cemetery, located four blocks northeast of the church, was established in 1865, 34 years before the parish. It has no formal connection to the parish as it is owned and administered by the archdiocese. 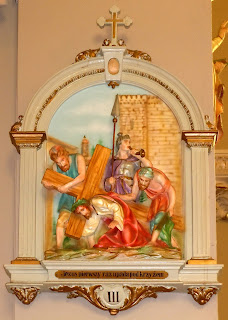 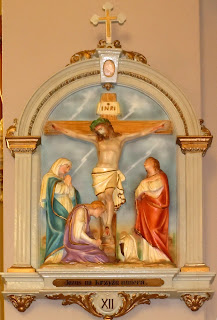 Our Lady of the Scapular continues to embrace their Polish heritage with classes focused on making sausage and pierogi, respectively, as well as different art classes and an annual Polish festival in late August.

Email ThisBlogThis!Share to TwitterShare to FacebookShare to Pinterest
Labels: Downriver, Our Lady of Mt. Carmel, Polish