In 1829, Fr. Patrick O'Kelly, a native of Kilkenny, Ireland, was sent to minister to Irish immigrants living in what was then known as Northfield. St. Brigid Parish was established in 1831, with fifteen families, and a log church was built that spring. St. Brigid was the first English-speaking parish in Michigan, established three years before Detroit's Most Holy Trinity. 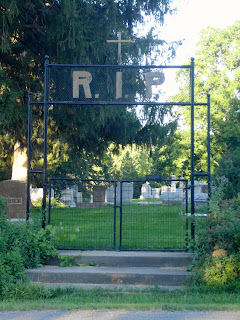 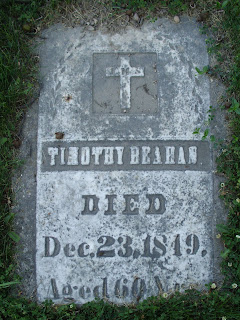 In 1837, the log church was torn down and replaced by another one on the site of the current cemetery. The parish continued to grow throughout the mid-19th Century, to a total of 90 families in 1850. 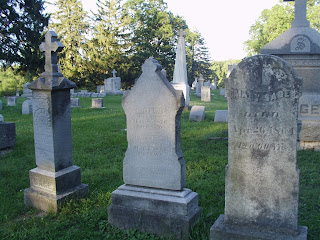 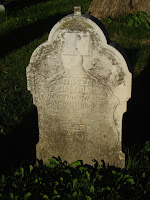 In 1875, the parish began raising funds to build a larger church. The cornerstone was laid on May 31, 1877, with parishioners doing most of the construction. Legend tells that, to ensure contributions for the new church, the pastor encouraged a friendly rivalry between the German and Irish families. Two separate collection boxes were set up, and if the Irish box contained more money, the church would be named St. Patrick, but if the German box contained more, it would be named St. Joseph. 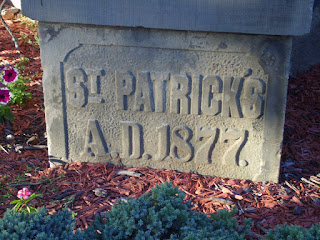 For one reason or another, the parish was renamed to St. Patrick and the current church was dedicated on October 20, 1878. The red brick edifice was built in a Gothic revival style on a rough-hewn stone foundation. A rectory was eventually built fourteen years later. 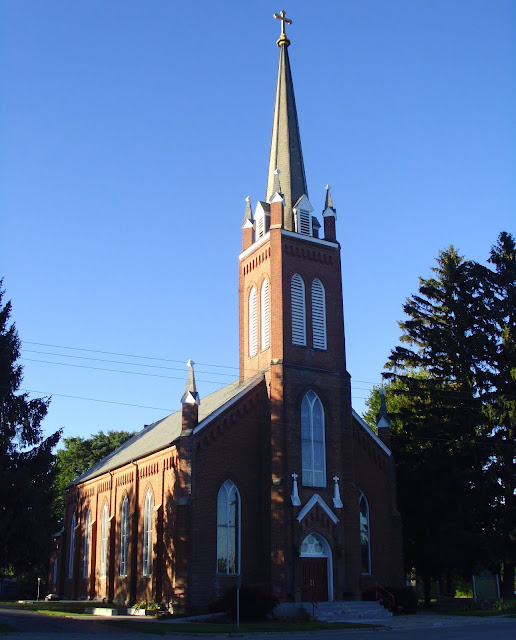 In 1917, strong winds ripped off the roofs from both the church and the rectory. Again in August, 1980, on a Sunday during the Labor Day Festival, a funnel-cloud blew out the walls of the parish hall. Thankfully, no injuries were reported and the building was re-built the following year. 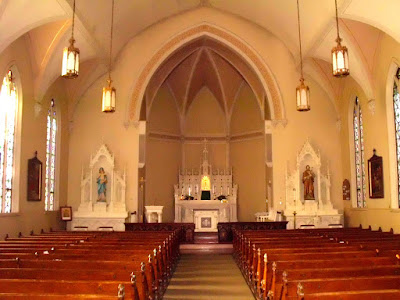 Over the course of its history, Old St. Patrick has had 31 pastors and has been under the jurisdiction of three different dioceses: Cincinnati, Detroit, and Lansing. 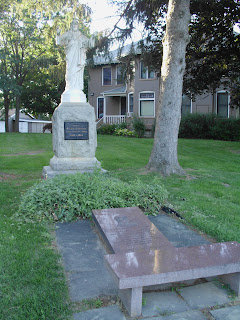 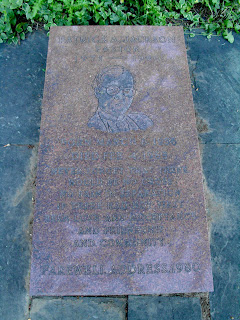 The grounds were designated a Michigan State Historic Site in 1976 and later added to the National Register of Historic Places in 1982. 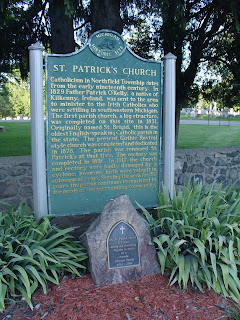 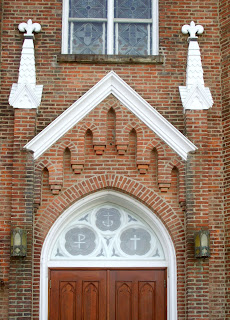 
At present, Old St. Patrick has about 375 registered families. Fr. Tom Wasilewski was appointed pastor last year, after Fr. Gawronski was sent to minister to Chaldeans in Iraq. 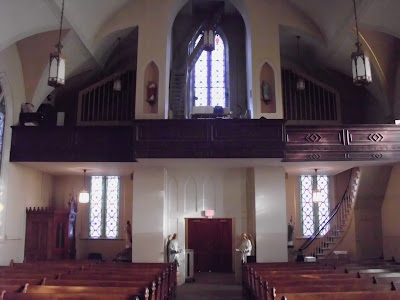 Throughout the church, even in the chancel, the walls are largely plain and unadorned. All three altars are white marble and Neo-Gothic style. 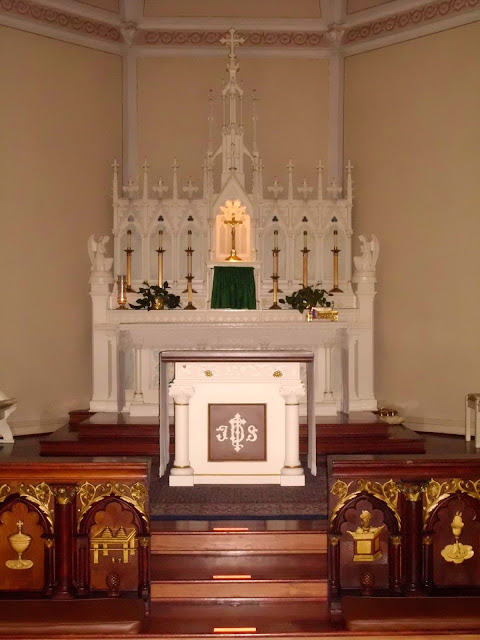 Wooden altar rails, featuring gilded symbols of the Eucharist, were restored and added several years ago. 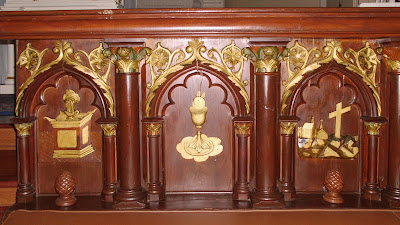 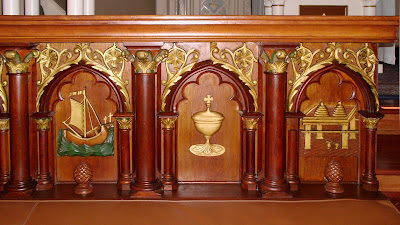 Side altars to the Blessed Virgin and St. Joseph, respectively. 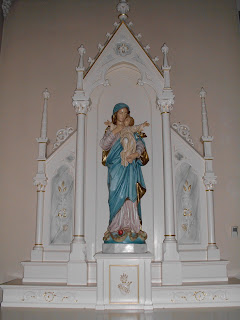 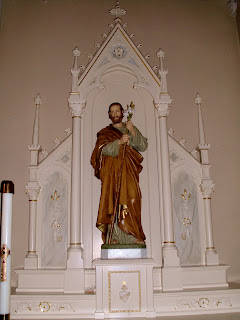 The baptismal font stands in front of the St. Joseph altar; one of two holy water fonts at the entrance. 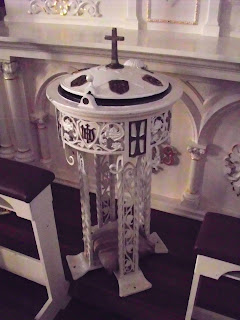 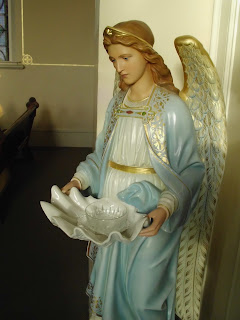 The only confessional stands in the back, right corner of the nave. 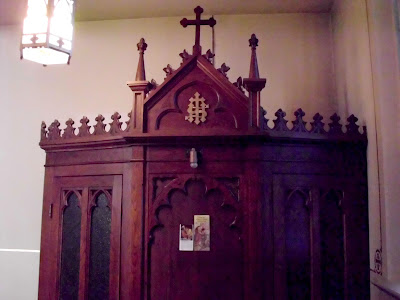 The Sacred Heart of Jesus stands in front of the confessional; the parish patron stands on the opposite side, underneath the stairs to the choir loft. 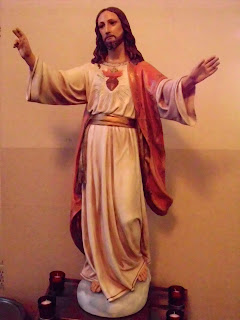 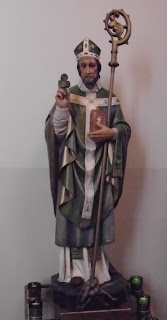 Large, painted Stations of the Cross hang in between windows. 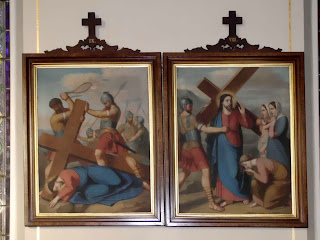 Lancet windows are shown throughout the church, on the front facade and along the sides. 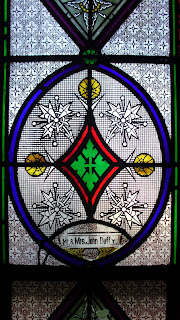 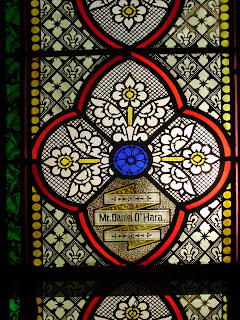 An Our Lady of Lourdes grotto stands in between the church and parish hall. 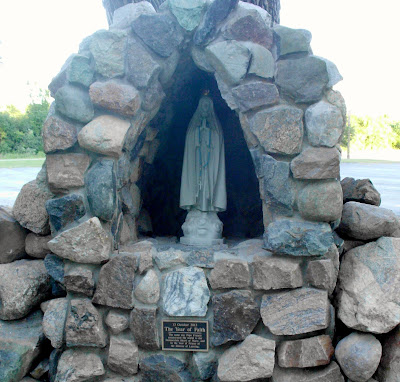 More history and about the parish: parish website + wikipedia
More about Fr. Gawronski: Diocese of Lansing 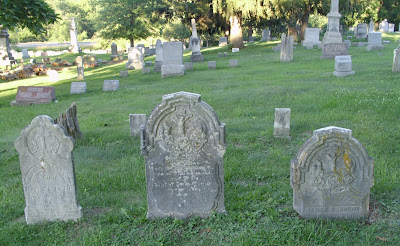 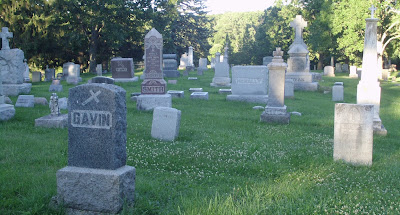