Fr. Patrick O'Kelly came from Detroit in circa 1830 and ministered to Irish immigrants in Washtenaw. At the same time, he ministered to what would soon become Old St. Patrick Parish north of Ann Arbor. On Jul 12, 1835, Fr. O'Kelly celebrated the city's first Mass in a private home. Five years later, under the direction of Fr. Thomas Cullen, Saint Thomas the Apostle Parish bought land near E. Kingsley and N. Division Streets. They soon built the city's first brick church. A parochial school was established in 1868. Fifteen years later, the parish bought land for the site of the current church. 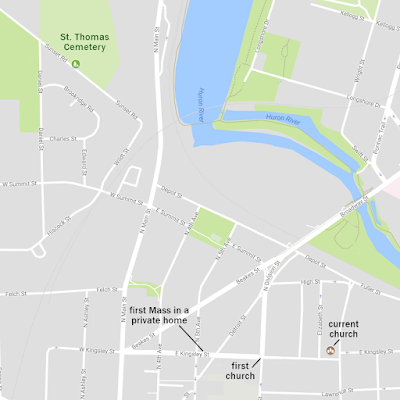 Fr. Edward D. Kelly was appointed pastor of St. Thomas in 1891 and he led the effort to build a larger, permanent church. The cornerstone of the current church was laid on Sunday, May 30, 1897. Bishop Foley of Detroit was originally scheduled to officiate but Bishop Joseph Radaemacher of Fort Wayne, Indiana, led the groundbreaking ceremony. He was assisted by many priests, including two that were raised at St. Thomas. Msgr. Morrisey, President of the University of Notre Dame, preached on John 3:16 at the groundbreaking ceremony. 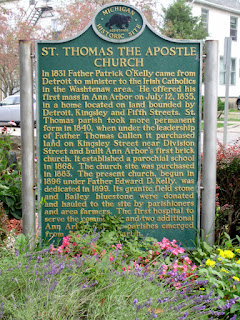 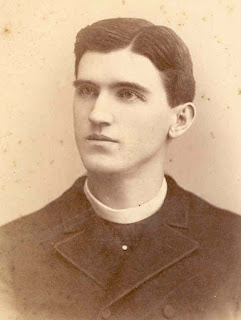 An illustration published in the June 4, 1897 edition of the Ann Arbor Argus. It shows the State Street (east) facade of the planned church. The church was built out of local field stones Ann Arbor's Koch Brothers. It was designed by Spiers & Rhons, from Detroit, in a Richardson Romanesque style.  Detroit's Nelson J. Rogers did the carpentry while Eberbach Hardware added a Spanish tile roof. The cost of the construction was $75,000 or $2.1 million adjusted for inflation. 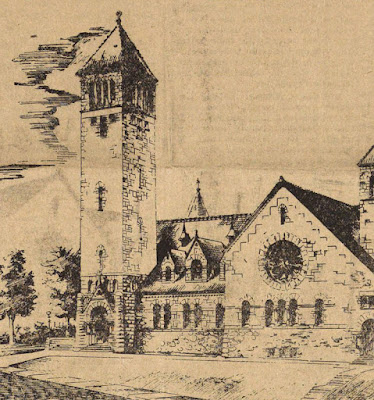 The base of the cruciform church measured 90'x150' and the main entrance is 40' in height. The church was dedicated in 1899 and originally featured an oil painting of the Ascension in the apse. The sanctuary consisted of an ornate altar, reredos and two angels, all of which were made of white marble. 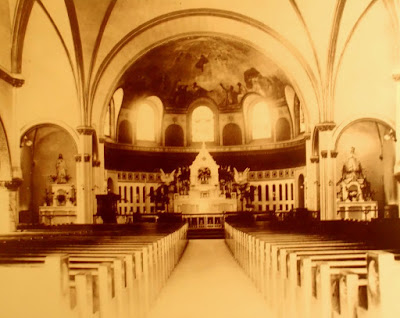 At the beginning of the 20th Century, St. Thomas had 1,500 parishioners, including 250 university students. A 1909 postcard shows the State Street facade and the rectory. A decade later, Fr. Kelly was appointed Bishop of Grand Rapids. 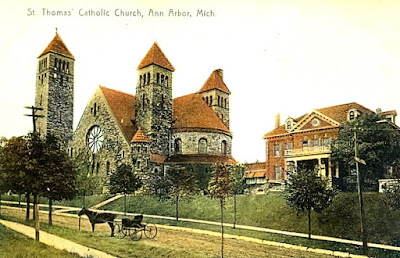 A Solemn High Requiem Mass after the death of Pope Pius XI in 1939. 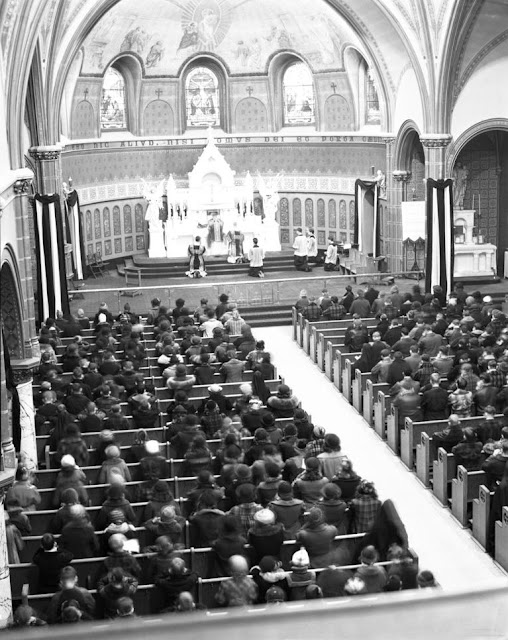 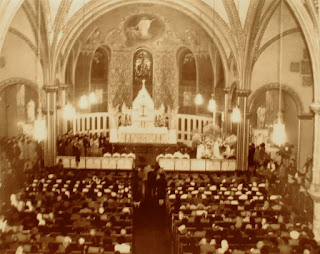 More renovations were made under the leadership of Msgr. G. Warren Peek, 1964-1993. Windows were covered and the apse was repainted gold. The high altar, reredos, marble angels, side altars and Communion rails were all removed. The sanctuary was extended, a simple, freestanding altar was added, and the first several rows of pews were rearranged. 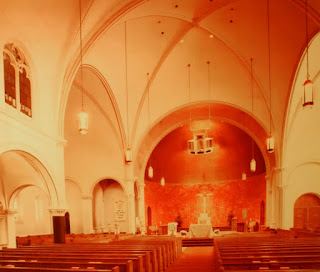 Fr. Tim M. Crowley was appointed pastor in 1993. He added a new, marble altar, uncovered the windows in the apse, and began the process of restoring the church to its original appearance. 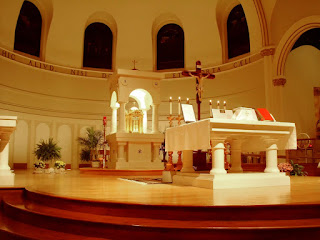 The interior of the church was repainted in early 2015, photos of the process are visible here. 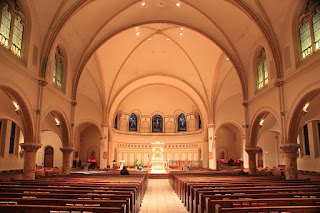 A plaster shelf at the base of the apse was restored. It shows an Latin inscription from Genesis 28:17b “Non est hic aliud, nisi domus Dei et porta caeli” — “This is none other than the house of God and the gate of heaven”

The parish plans to further the restore the church to resemble its original appearance. Restorations would include new reredos, a mural of the Ascension, side altars, and more ornate details. 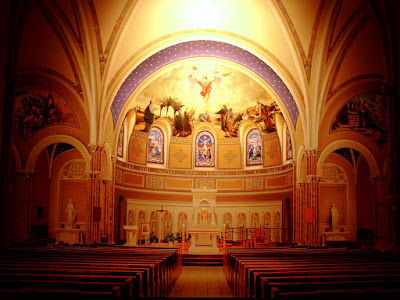 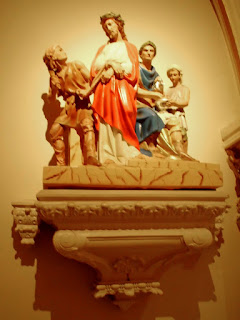 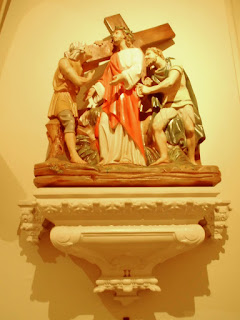 Stained-glass windows also seem to be original — many windows feature the same motif and different symbols of Our Lord. 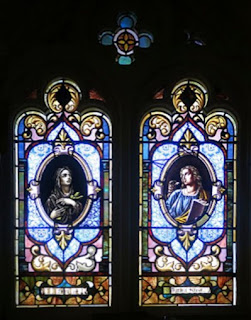 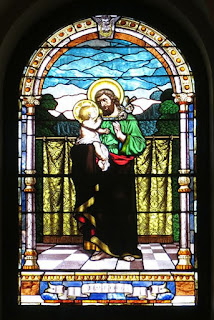 Our Lady is pictured in the east transept's rose window. 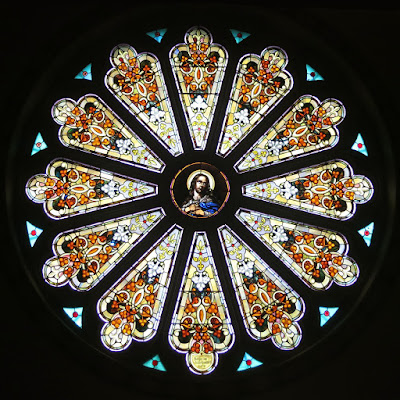 Our Lord, with staff and crown of thorns, is pictured in the west transept. 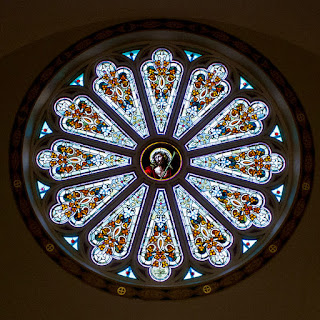 Quatrefoil patterns are seen above doorways, in carved wood and in stained glass. 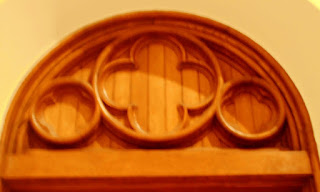 In 1980, the high school separated from the parish and took the name of Fr. Gabriel Richard High School, named after the prominent, 19th Century priest and founder of the University of Michigan. However, a parish elementary school remains in operation today. 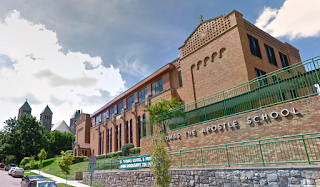 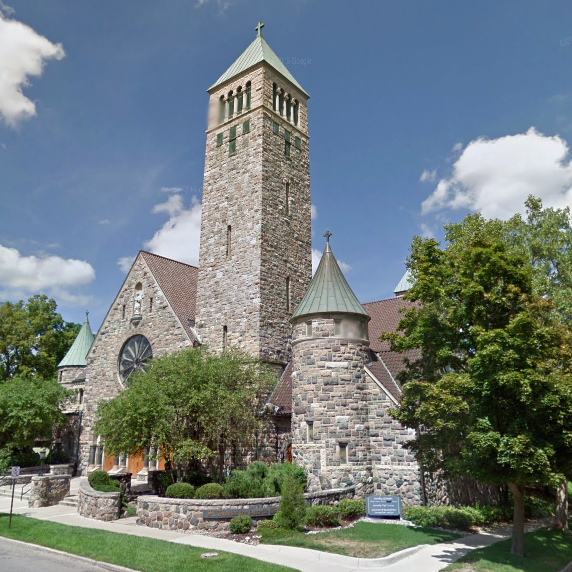