I went to Holy Thursday Mass in 2011 at St. Louis the King. This was part of a tour that I went on. (Yes it took  me 1 year to get a post up.)  St. Louis the King was founded in 1923, and its current edifice was built in 1959.  When I walked in and looked about I was reminded of St. Barbara in Dearborn. (Founded 1924, Built 1955)  It is similar in some ways to St. Peter and Paul (West Side, founded 1923, church probably built in the '50s as well) as well.  The Poles were spreading out in the '20s and building their churches in the 50's apparently! (Yes these are all Polish churches.)  While these lack the grandeur and decoration of the  Polish churches before the turn of the 20th Century, these churches are still dignified in construction, and you know where the focus belongs.

The parish has been merged with St. Ladislaus (Hamtramck) and Transfiguration/Our Lady Help of Christians to form Blessed John Paul II Parish.  It appears as though all three churches have weekly masses, if the Genesis Vicariate website is up to date.  I wonder if the bass who sang the lowest Panis Angelicus anyone could ever hear has been retained.

I didn't get a very good picture of the sanctuary, but please see that and some more of my pictures below. 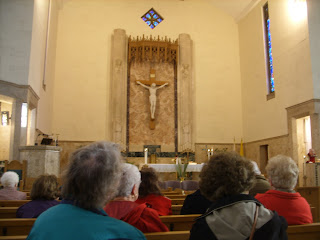 Things are more on the simple side here, but still dignified and the focus is on the cross and the tabernacle. 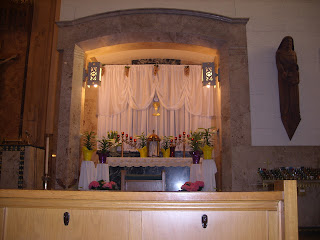 This is the altar of repose. 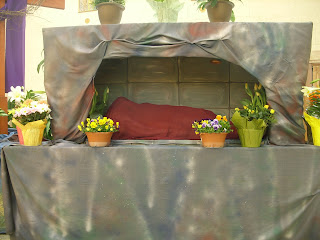 A Polish tradition they have retained: the Tomb of Christ

St. Maximilian Kolbe who just over 8 months after this became more significant to me. 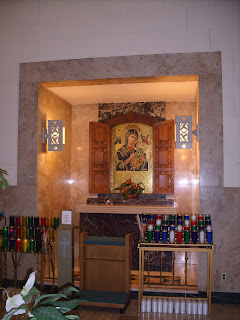 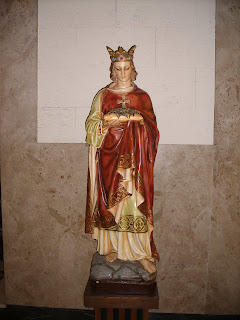