Throughout the 1800s, German, Polish and Hungarian immigrants settled near Fort Wayne in what was, at the time, known as Belgrade. Workers were drawn to jobs on the riverfront and in the salt mines. The area was later incorporated as the Village of Delray. However, in the late 1800s, there were no Catholic churches within four miles of Delray.

St. Francis D'Assisi Parish was established in 1889 and, for the time being, Delray Catholics worshiped and studied at St. Francis.  After two years, tired of the four-mile commute to church and school, 38 families requested that Bishop Foley found a new parish in Delray. Fr. Felix Kieruj (pastor) and Fr. John Walczak (vicar) at St. Francis helped with the process of starting a new parish. 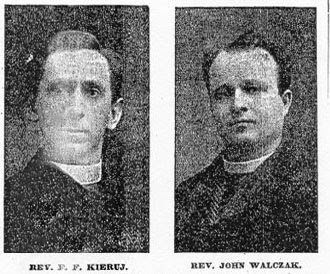 The congregation pleaded with Bishop Foley for two years with no resolution. Eventually, Fr. Kieruj suggested that the group, which grew to 90 families, buy land to show their determination to build a new church. Two weeks later, Bishop Foley approved the establishment of St. John Cantius Parish. The sale of nine plots of land was finalized on April 5, 1902. Fr. Walczak was assigned the founding pastor and he led the effort to build a temporary church and school. Felician Sisters soon arrived and began teaching 107 students.


Delray was annexed by Detroit in 1908, though the neighborhood remained semi-autonomous. After several years in the temporary St. John Cantius Church, the congregation needed a larger and permanent structure. Bishop Kodelka of Cleveland laid the cornerstone of a dual-purpose church and school on August 28, 1910. Harry J. Rill was the architect — he also designed St. Leo, Our Lady of Mt. Carmel, and St. Paul on the Lake. The cost of construction was $51,000 (or $1.3 million adjusted for inflation).

The parish continued to grow over the next decade and planned to build a separate edifice for the church. The cornerstone of the extant structure was laid in 1923. The following year, a child parish of SS. Andrew & Benedict opened three miles away and remains open today. 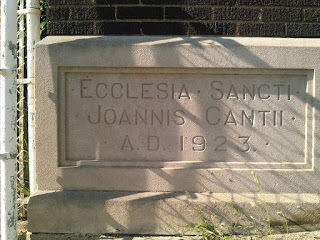 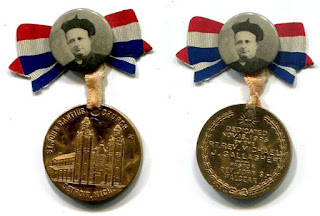 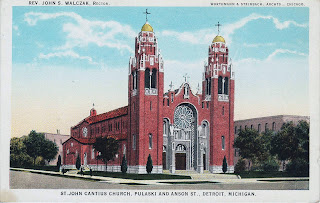 Industry was booming in Delray for decades, for better or worse. Nearby Zug Island became almost entirely industrialized and factories provided jobs but pollution compromised on quality of life. 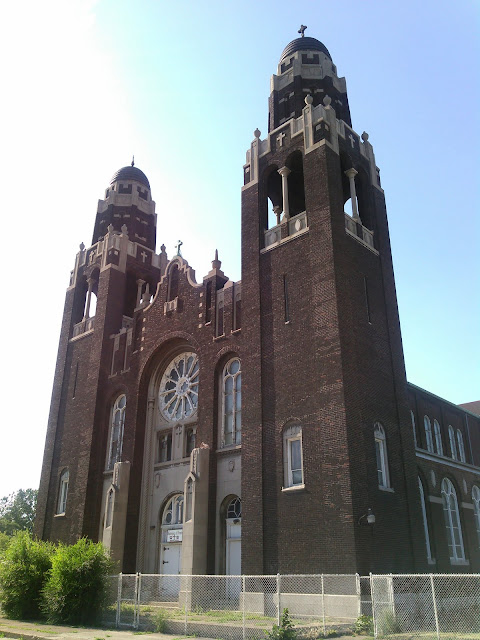 Since Delray was on the edge of Detroit and heavily industrialized, city government had little concern for residents. During the 1950s, hundreds of houses were razed to make room for the I-75/Rouge River bridge. This, to a certain degree, began the exodus of Delray residents moving to the suburbs and more desirable parts of Detroit. 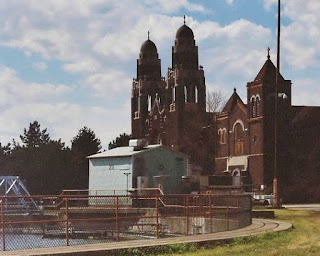 Enrollment at the school dropped to 309 in 1950 and continued to decrease until the school closed in June of 1969. The parish continued to use the basement social hall but, otherwise, the school was unused.
In 1974, the City of Detroit sought to expand the water and sewerage treatment adjacent to the church. The city bought and razed 300 houses immediately surrounding St. John Cantius and planned to do the same with the church. However, St. John Cantius was spared with the help of city council members Billy Rogell and Jack Kelley. 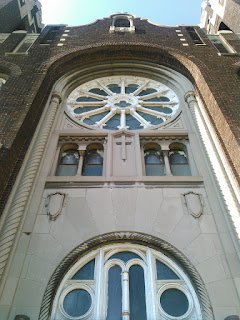 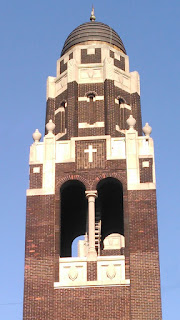 St. John Cantius numbered 425 families in 1985, 75% of whom claimed Polish heritage. Many Detroit parishes were closed in the late 1980s but, again, St. John Cantius was spared. Delray continued to suffer from abandonment, reaching a low of 3,100 residents in 2000 and 176 registered families at the parish. 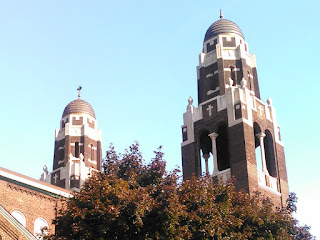 On October 3, 2006, faulty wiring caused a fire on the east side of the school and  the building was destroyed. The former school was demolished in the following summer. 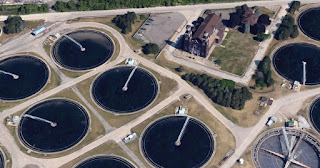 The first in a nine-part video series recording the last Mass on October 28, 2007. The procession starts around the two-minute mark:

While St. John Cantius closed nearly a decade ago, artifacts from the church have survived and have been relocated across the state. Many sacred items were claimed by St. Francis D'Assisi as well as SS. Andrew & Benedict, parishes that had close ties to St. John Cantius.
Stained-glass windows, in particular, were of high value. A window featuring the patron St. John Cantius was salvaged, refurbished and reinstalled at Madonna University in 2009. Madonna also claimed a statue of St. John Cantius. 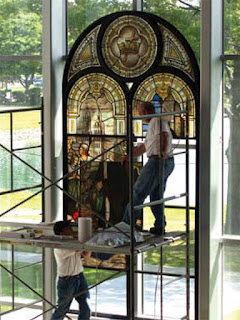 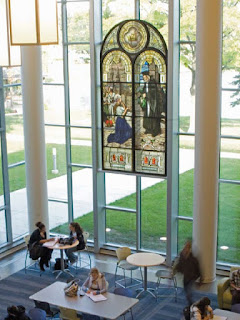 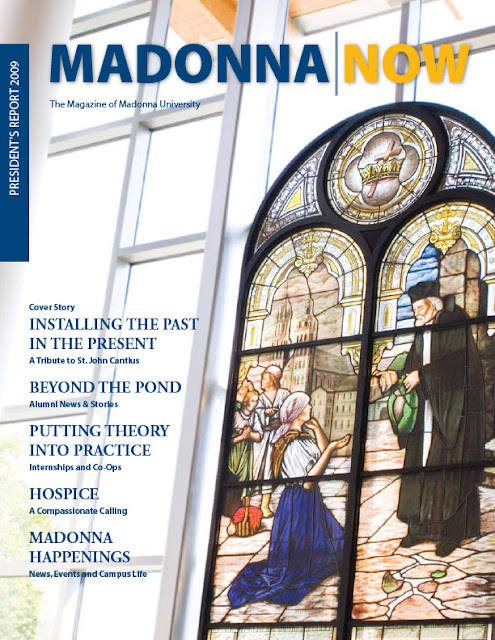 Two windows were installed at St. Catherine of Siena Academy in Wixom. Two more windows were moved to St. Paul on the Lake School in Grosse Pointe Farms. One window depicts their patron, St. Paul the Apostle, while another window shows a child and guardian angel. 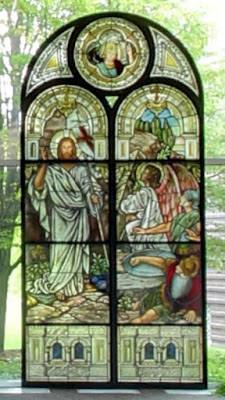 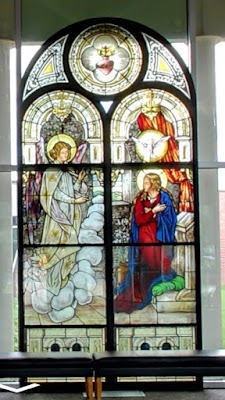 A statue of St. Anne and Child Mary was moved to Ste. Anne de Detroit Church. 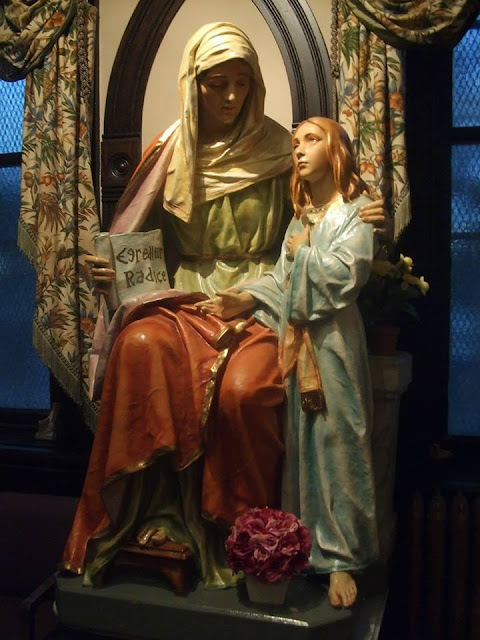 The former church was briefly occupied by a Protestant congregation in 2010 but the building has been largely abandoned since then. 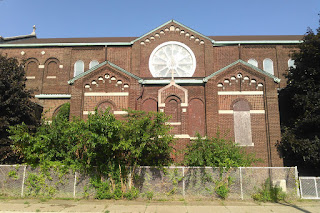 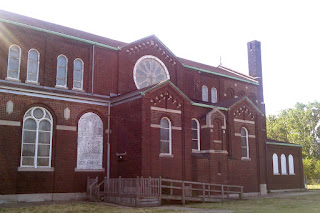 Great information. I was riding my bike down W. jefferson and wondering about all of the old and mostly abandoned churches in Delray. This is the probably the most prominent church in the area.