If you miss the turn onto Lafayette for Old St. Mary's, you'll pass the much smaller, but still quite beautiful Holy Family on the Chrysler service drive. If it is 9:20 on a Sunday morning, you just may be able to find a parking spot in front of the Church. If you can't, be prepared to walk a block or two. Mass is at 9:30 and is celebrated in the Ordinary Form aka Novus Ordo, but in Latin. In an interesting case of cross-pollination that Fr. Z might call the gravitational pull, or the New Liturgical Movement might call "Reform of the Reform" the following was observed:

The first and last example aren't all that extraordinary to me, but seeing the lifting of the Chasuble (which was Gothic, not Roman by the way) was new to me.

Holy Family was officially established in 1908 to serve the Sicilian population in Detroit. Google books has the book published in 2008 for the 100th anniversary. A quick read through the introduction shows that this parish has as interesting a history as many of the others in the city. I suggest you read it or at least scroll through the book to see the many historical photographs.

The Church, currently under administration of the Spiritans who run nearby St. Mary's, is visually stunning. They really packed a lot into a small worship space. 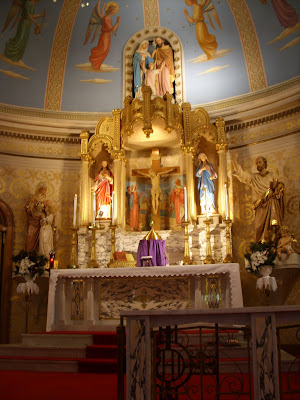 Mass is said at the High Altar, and there isn't much room to add a free-standing altar. 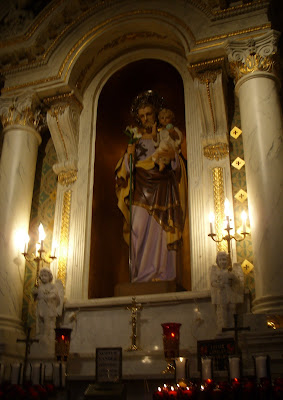 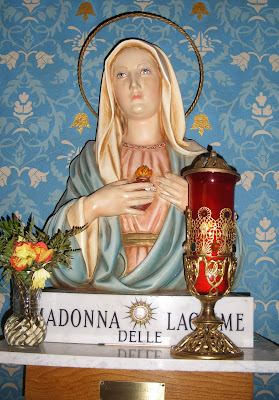 There were many Statues of Mary, but this picture of Madonna delle Lacrime (Our Lady of Tears) in the Vestibule turned out the best. The reliquary contains a cloth which I would assume touched the original image in Siracusa, Sicily if not the tears from it. 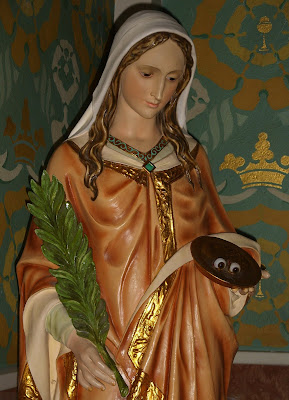 The Eyes Have it: Santa Lucia, who is also from Siracusa, Sicily. 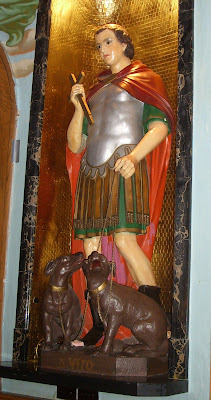 San Vito, the patron of Dogs and dancers, was also Sicilian. 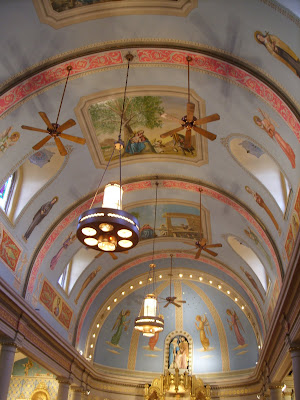 The Ceiling is painted beautifully with Saints and scenes of the Holy Family.
On the upper right of this photo you'll spot our old friend St. Therese.

I actually got there during the Confiteor, so I missed what they did before that. It was at the foot of the altar though. So I have no idea if they did Judica Me or any of the surrounding bits. I am pretty sure They didn't do the "Deus, tu conversus... etc" but I was a little disoriented.

I'll have to go again and leave earlier so I have time to walk 2 blocks.

I remember reading some years ago that they do the prayers at the foot of the altar there prior to beginning the novus ordo.

This was our first mass at Holy Family and I just want to say what a warm and welcoming parish family it has and such a beautiful church. We live on the west side and will visit again when back in Detroit. My prayers are for Holy Family to thrive in all its traditions and history.