Presentation / Our Lady of Victory 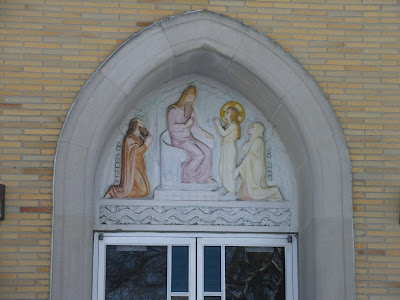 Presentation as I heard was a Caucasian parish, and their edifice was chosen to serve the merged community. The story of Presentation starts in 1941 according to Make Straight the Path, but I haven't been able to find much more information on this part of the merger.

The folks I met with after the Tuesday Noon Communion service (The parish is administered by Deacon Hubert Sanders, but Fr. Michael Byrnes comes for Sunday Mass) were much more familiar with the story of Our Lady of Victory, and some of them were even around during the early years of the community. Deacon Hubert also grew up in the OLV Community.

Our Lady of Victory's story begins in a store front on 8 mile in 1943. The founding pastor was Fr. Alvin Deem OFM. Another key figure in the founding of the Our Lady of Victory Mission was Anna 'Madre' Bates who is honored by having a hall named for her. There is certainly much more of a story to tell, and Shirley Slaughter, a parishioner aimed to tell it in her book Our Lady of Victory: The Saga of an African-American Catholic Community. I have not read the book, but it is probably a good read on the subject of the history of Black Catholics in the 20th century.

The building itself dates probably from the mid to late 40s, probably with a renovation in the 70s. As a result we have a more simple Church building and a different style of artwork than we've seen in my previous entries. The Stations of the cross are nearly identical to those I saw at Holy Family.

On to the pictures: 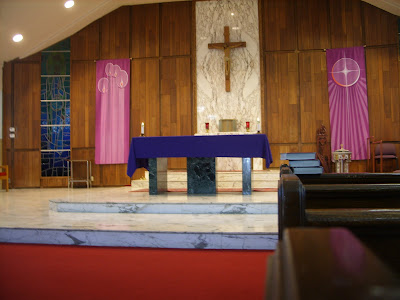 The Sanctuary is simple and tasteful. 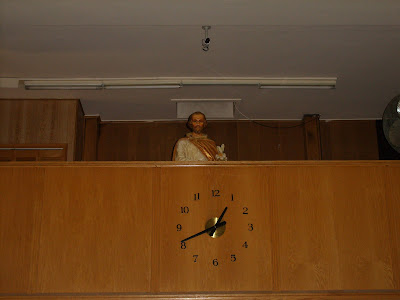 I was a little surprised to see St. Joseph up in the choir loft, but there he was as 12:42. 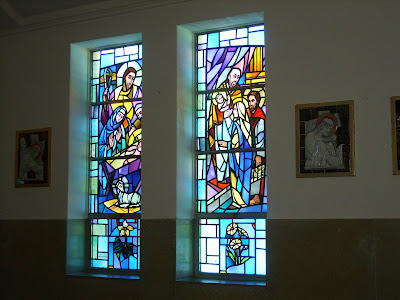 Stained glass reprentations of the Nativity and the Presentation of Our Lord
Note also the stations. 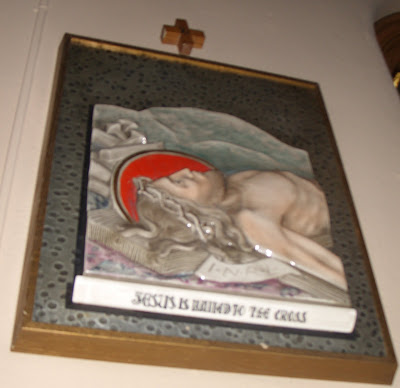 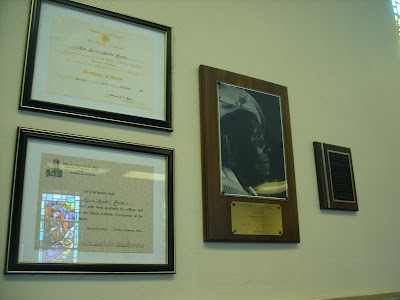 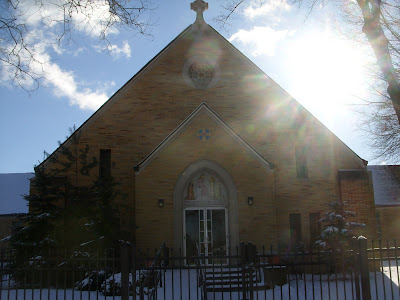 POLOV on a winter's day.
Their sign on Meyers says "All are welcome." The folks I met there today made me feel welcome, and they will do the same to you as well if you ever drop in. They are small but active community, and I am glad I visited. Thanks for your hospitality and the story of your parish.
Posted by Unknown at 12/14/2010 11:42:00 PM

That is my parish! Yes, all are welcome as we strive to spread the good news of our Savior.

That is my parish! Yes, all are welcome as we strive to spread the good news of our Savior.

Wouldn't you know it? I stumbled onto this blog in a search engine looking up Our Lady of Victory (my parish). I'm the author of the book you mentioned having not read yet. Check it out. Its a good narrative history. www.rememberourladyofvictory.com.

I posted it for my readers. By the way that link in your blog is not active. This one is.
Thanks so much for mentioning our parish. We still have Deacon Sanders, but we now have Msgr McCrory and we love him.

I'm reading "Our Lady of Victory" saga at the present. I was so fascinated, I too, looked it up on Google and found Archdiocese of Detroit blog. Great article. Hope to finish book today.
Everyone interested in this subject should read this book.

I went to grade school there. Some of the best times of my life were at that school