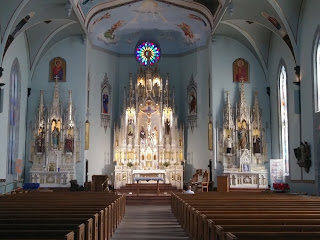 German immigrants began settling in Monroe circa 1840. In 1845,  Fr. Simon Saenderl, a Redemptorist priest, ministered to German-speaking Catholics in a second-floor chapel of the St. Mary rectory. He was soon sent to minister in Hillsdale and Lenawee Counties and was replaced by Fr. Peter Kronenberg.

The founding families bought property on Humphrey Street. However, when the home and land of Monroe’s first mayor, George B. Harleston, was up for sale, the congregation bought the property for $2,000. On that land stands, today, the parish church and rectory. 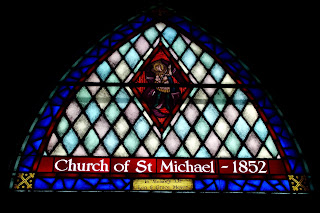 The former home of the mayor was soon converted into a church. Fr. Bernard Hafkenscheid, Provincial of the Redemptorists in America, blessed the church on the Feast of St. Michael the Archangel, September 29, 1852. The patronage of St. Michael was chosen at the request of Michael Lauer, a local businessman and generous donor. 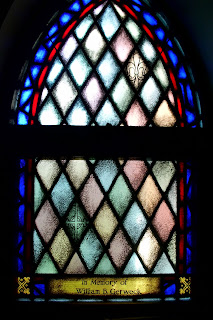 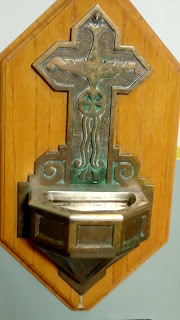 On May 3, 1860, Fr. Julian Maciejewski arrived at St. Michael as the first resident pastor. He died a year later and was buried at Mt. Elliot Cemetery in Detroit. Fr. Remigius VanDerHeyden, vicar at nearby St. Mary, was temporary rector for a few months until the arrival of Fr. Bernard C. Stentzel in November of 1861. Two years later, Fr. Benjamin Schmittdiel began a thirty-six year term as pastor.
Fr. Schmittdiel oversaw the construction of a permanent church. The parish purchased of a set of plans and specifications that had been used in the recent construction of the Cathedral of the Immaculate Conception in Fort Wayne, Indiana. John Wahl began work on the church and the cornerstone was laid on June 12, 1866. 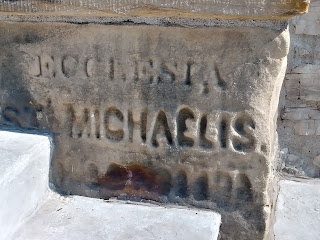 The total cost of construction, excluding tower and bells, was $30,000. On the Feast of the Guardian Angels, October 2, 1867, the church was consecrated by Bishop J. H. Luers of Fort Wayne. Bishop Lefevere was too sick to conduct the rites of consecration. 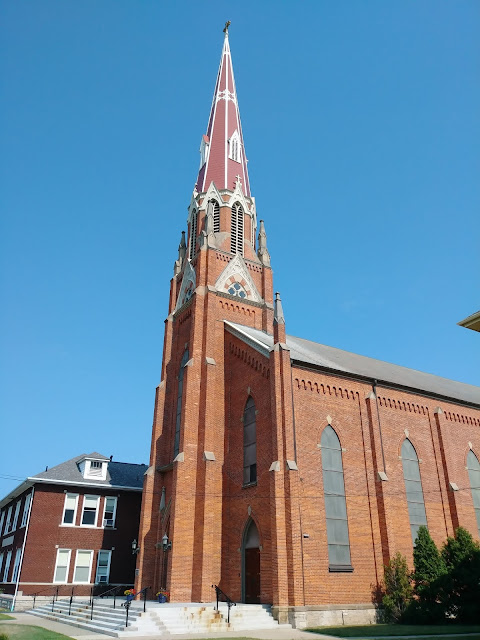 The church spire was completed on Thursday, August 16, 1883. The parish placed an $1,800 order with the St. Louis Bell Foundry in late November of 1884. Henry Struckstede cast three bells the next month. The bells weigh two tons, one ton, and a half ton, respectively. They arrived at St. Michael Church on Friday, January 2, 1885, and were on display at the church for a week. On Sunday, January 11th, Bishop Borgess presided over a ceremony to bless the three bells named Jesus, Mary and Joseph. Installation of the bells began the next day. 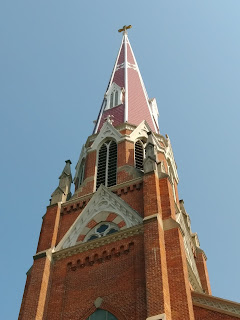 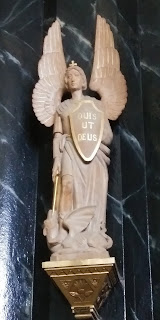 Stations of the Cross were fabricated by Tyrolese Art Company in Munich, Germany. They were installed in 1923 at a cost of $2,425. 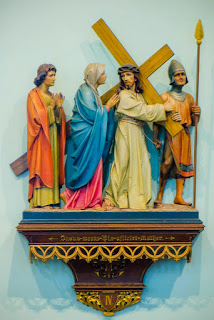 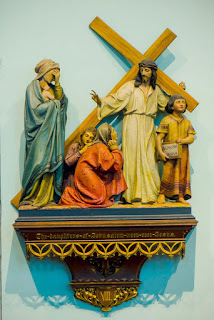 Stained-glass windows were donated at a value of $100 each at the time. A replacement value of $971,388 was estimated for the stained glass windows in 2015. 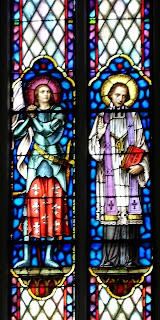 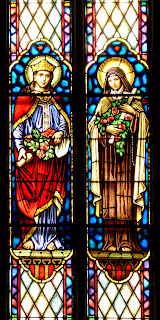 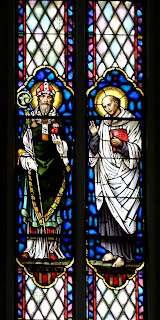 All of the altars are carved from solid oak and made in a Gothic Revival style. 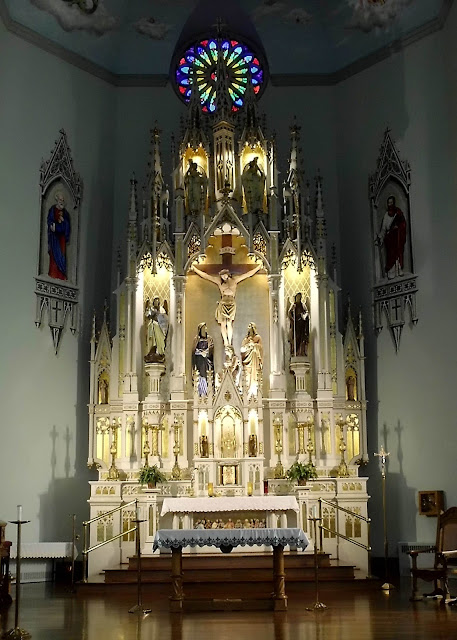 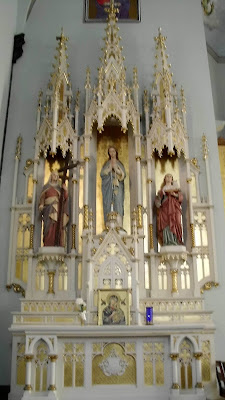 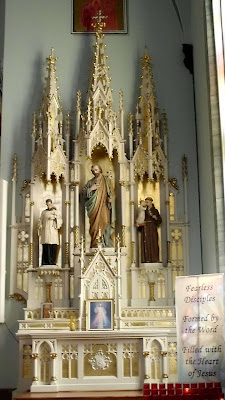 Mysteries of the Rosary are painted on the ceiling. The Presentation in the Temple and the Finding of the Child Jesus in the Temple are portrayed below. 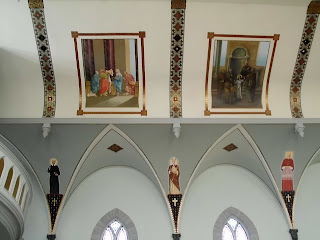 On July 22, 2014, the church was subject to an arson. An arsonist ignited linen on the altars but, thankfully, the damage inflicted was minimal.


Within the next year, the altars and murals were restored.

There have been 16 pastors in the history of St. Michael Parish. Fr. Philip Ching, the current pastor, has led the parish for the past three years. He is assisted by Deacon Tracy Esper.

Daily Mass is at 8:15am on Mondays and Fridays. On First Fridays, the Blessed Sacrament is exposed for Adoration, after morning Mass and until 7:00pm. The Sacred Heart prayer group meets at 6:00pm on Tuesdays. 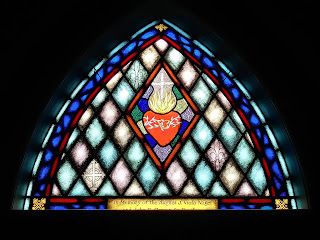 The Sacrament of Reconciliation is offered on Saturdays, 3:30pm-4:45pm, and by appointment. 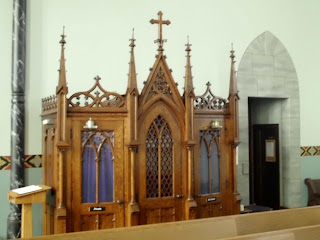 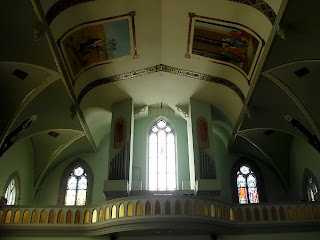 Our Lady of Fatima stands in a garden between the church and rectory. 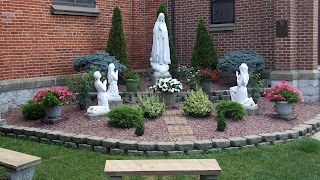 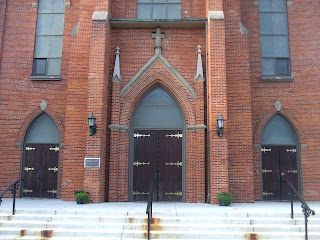 I thought this was a closed parish?

Thankfully, this church is definitely still open. I have not heard any reports of it even possibly clustering, merging or closing. There used to be a St. Joseph Parish in Monroe and that merged with St. John the Baptist in 2014.

I was thinking of St. Joseph. My parents are parishioners at St. John’s and would occasionally go to St. Joe’s when they shared a priest with St. John’s