St. Aloysius (named for the Jesuit Aloysius Gonzaga) is a bit of an oasis in downtown Detroit nestled among the skyscrapers of Washington Street. St. Aloysius was founded in 1873 when Bishop Borgess purchased "Westminster Presbyterian Church" which was constructed in 1860. In 1877 St. Aloysius supplanted SS. Peter and Paul as the Cathedral for the diocese of Detroit. This was likely an easy transition for Bishop Borgess who lived across the street. The site of Bishop Borgess's home is "now occupied by the Book building." (Make Straight the Path, 72)

In March of 1916, the Church started a noon daily Mass to accommodate the workers of this business district, and this Mass continues to this day. It was on Tuesday of Thanksgiving week that I met a friend who works nearby for Mass and a meal. 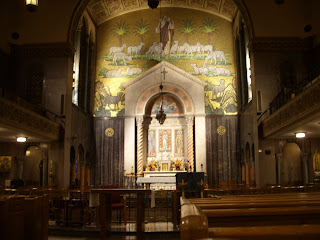 This picture hardly does St. Aloysius justice. St. Al's has 3 levels, the loft you can see and the main floor, but behind the daily mass altar there is a semicircular hole looking down to the crypt level of the church. Above the high altar is a large mosaic of Christ the Good Shepherd. 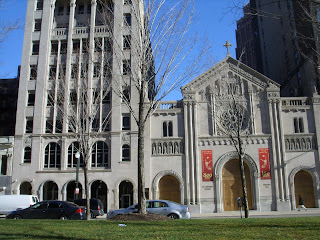 The church as it stands today was constructed in 1930 by the Donaldson and Meier Firm who did the Chancery building to the left 4 years previous as well as Sacred Heart Major Seminary.

The parish has been under the care of the Franciscans since 1992.

After 12:15 Mass you can head next door to the State Deli and Grocery for a Deli Sandwich or even a burger and fries. If it's nice out Washington Street is a really nice area to sit outside and eat. You could also head down to Michigan and Lafayette and go to American or Lafayette Coney Island, but I didn't want to ignite any debate by choosing sides, so I've left that choice up to you, dear reader.

The book I referenced heavily for this post is Make Straight the Path: A 300-year Pilgrimage, Archdiocese of Detroit. This 12"x12" coffee table book is filled with the stories of the Churches of the Archdiocese and contains many beautiful pictures. The link above is to Amazon, and is the one the AOD provides, but you can probably find it in area Catholic Bookstores. There is a book store next to St. Aloysius in the former Chancery building. How convenient!
Posted by Unknown at 11/26/2010 01:54:00 PM

Email ThisBlogThis!Share to TwitterShare to FacebookShare to Pinterest
Labels: Mass and a Meal, St. Aloysius