Sweetest Heart of Mary is a bit of a Felix Culpa - not quite on par with the necessary sin of Adam but a happy fault nonetheless. The origins of this beautiful Cathedral-like church are steeped in controversy. Investigations, marches on the Bishop Borgess' residence, warring factions of Poles, interdict, schism, you name it.

"On June 5, 1892, a cornerstone-laying ceremony presided over by a 'bishop' of dubious antecedents took place. On December 24, 1893, Christmas Eve, the church was officially dedicated with great pomp and circumstance by a so­-called Old Catholic bishop, Joseph Rene Vilatte."

"On February 18, 1894, in a memorable ceremony, he and his congregation were officially received into the Diocese of Detroit."

The story doesn't end there, so read the whole history. You can also go on virtual tour with images with good descriptions of the manifold beautiful features of this church. 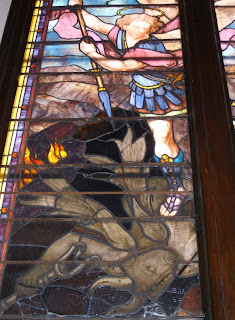 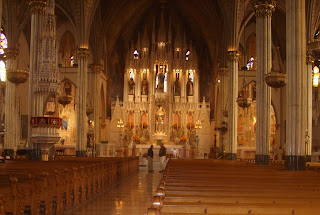 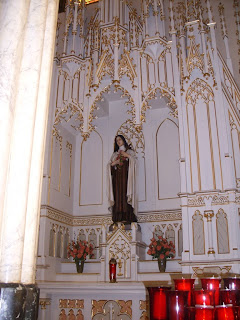 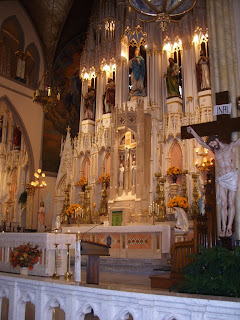 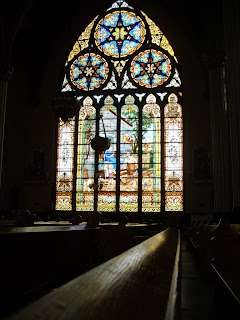 60' x 30' Stained Glass depicting the Holy Family
(dimensions come from Discovering Stained Glass in Detroit By Nola Huse Tutag, Lucy Hamilton)
Be sure to check out the parish website's photos, and get down here for Mass sometime! Every Friday there is a noon Mass followed by Devotions to the Sacred Heart and Benediction. Here is the rest of the schedule and a who's who of the parish.

After Mass you can drive down to Mack and Russell and stop at the Milano Cafe. You can get a sandwich with your choice of side and a pickle for anywhere form 3.50 (Grilled Cheese) to 7.99 (Meat-laden behemoths). I got the Charlie on Rye, which is a tuna melt. It wasn't the best sandwich, I've ever had or anything, but it was good enough. They also have pizza and plenty of bakery treats. The counter staff was young and friendly. The place was neat and tidy. Not a bad place to go for a lunch, but they close early, so get your dinner elsewhere. Apparently it is the largest hearth bakery in Michigan, and they also baked the bread for the Guinness world record largest sandwich. Al Gore is also fan of this joint apparently. They had an autographed photo on the wall.
Posted by Unknown at 11/19/2010 02:57:00 PM

Email ThisBlogThis!Share to TwitterShare to FacebookShare to Pinterest
Labels: Sweetest Heart of Mary

The day old bread at Milano is a fantastic deal/steal. Auntie B