The Grandmammy of them All - Ste. Anne de Detroit

Grandmammy in 2 senses. St. Anne of course is the mother of Mary, which makes her the Grandmother of Jesus Christ our Lord. Ste Anne de Detroit is the oldest parish in Detroit being that it was founded in 1701. The current building however was erected in 1886 making it younger than the Church which I will discuss tomorrow.

Ste. Anne is the 2nd oldest continuously running parish in the United States, so naturally there is a lot of history here. One of her most famous pastors was Fr. Gabriel Richard whose body lies in the chapel where they have daily mass which I attended on November 16th. Featured in the chapel is the altar which Fr. Gabriel Richard used. I doubt the swimming Jesus resurrectifix was around in Fr. Gabe's day. Among other things he founded the University of Michigan and coined the city's motto: Speramus meliora; resurget cineribus. We hope for better things; it will rise from the ashes. He should know. The church of Ste. Anne burned down in 1703, 1714 (on purpose), and 1805. Check the wikipedia link above or the parish web site for history. 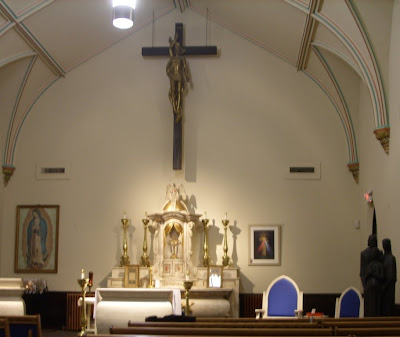 The 5:15 Mass time would naturally be followed by dinner. After Mass you have several options for a meal, and if you are into Mexican or other Latin cuisine, you are in the right place. Mexican Town is just down the street. I however went the Guatemalan route and went to Pollo Chapin on Junction Street Between Vernor and Toledo. They are best known for their fried chicken, but their other dishes are pretty good as well. I recommend the macaroni and cheese and the cabbage and jalapeño salad. I also recommend that you do not fear the jar on the table. Enjoy the pickled vegetables! I put them in the soup and would eat it plain. For $2.50 you can take some home! All the meals are served with a hearty chicken noodle soup, and at least today was followed by sopapillas with honey and cinnamon. 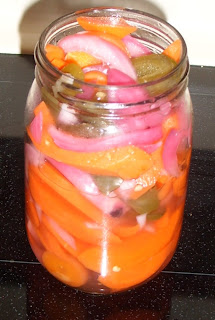 Wow Andrew...I never heard of this restaurant. I do know this. After Sunday Mass plenty of folks head to Evies for breakfast. Auntie B