The second stop of the Church tour was St. Albertus. I have already posted on St. Abertus twice, but I have some more detailed photos and a few more tidbits to share. St. Albertus is a gothic Church in a medieval style full of color with its several painted plaster features including the stations of which one is shown here: 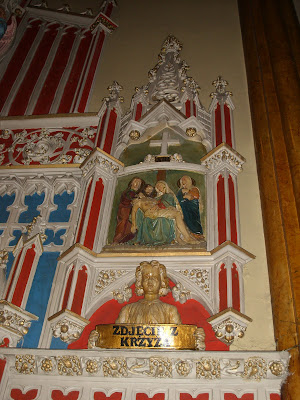 The church seats an astonishing 2500, but the pews have walls in the middle so you can't get from aisle to aisle through the pews except at the front or the back. This is because that is where the steam pipes run. ~3/4 of the Church has no basement or crawlspace so they couldn't go underneath. 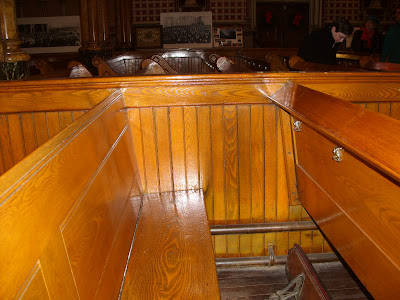 According to the pamphlet they had in the church, Karol Cardinal Wojtyla was the main celebrant for a Mass on August 12 1976. 2 years, 2 months, and 4 days later he would be elected Pope. Here is the Stand-alone Altar (at which Wojtyla would have said mass) and the Main Altar/Reredos: 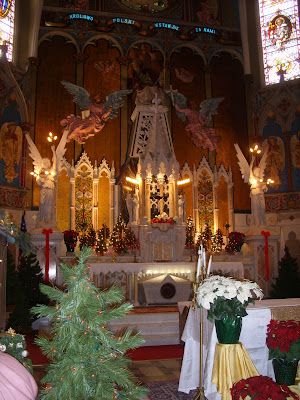 When the parish closed in 1990, the statue of St. Hedwig was sent to a St. Hedwig in Toledo. Apparently the statue in repose creeped out some of the parishioners down there and the Polish American Historical Site Association (PAHSA) was able to get her back. Here she lies underneath the Marian altar: 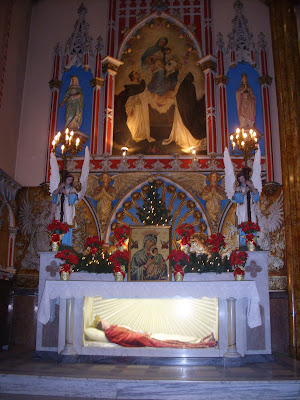 Your next opportunity to visit St Albertus is January 23rd at noon. Mass will be said in the Extraordinary Form by Fr. Borkowski. See the full Mass and event schedule here.

There are manifold other things I could say and pictures I could post, but I don't want to go on too long. I will make an attempt at organizing these and additional photos with informative captions in my Picasa album. This project will continue to develop, but we will see where this goes.